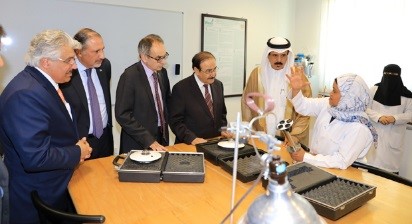 to participate in the national goals to achieve the rates of dependence on renewable energy of not less than 5% by 2025.

The Kingdom of Bahrain is increasingly using renewable energy to generate electricity, and the government is pushing for optimal utilisation of this energy. Therefore, The Sustainable Energy Centre (SEC) is receiving special attention from His Majesty King Hamad bin Isa Al Khalifa, the King of the Kingdom of Bahrain, to invest in renewable energy. This attention comes due to the Centre’s role in providing technical support for the relevant technical authorities concerned with the preservation of all kinds of sustainable energy sources, achieving their secure use, and encouraging investment in them.
Therefore, the University of Bahrain (UoB) strives to participate in the national goals to achieve the rates of dependence on renewable energy of not less than 5% by 2025.
As a result, four renewable energy laboratories were opened at the University campus in Sakhir, on Tuesday, 16th April, 2019, in collaboration with the Centre for Renewable Energy Systems Technology (CREST) at Loughborough University.
The establishment of these new laboratories comes as part of UoB’s efforts to enhance cooperation with renowned institutions of higher education in the development of academic programmes and the promotion of scientific research, which will contribute to keeping pace with everything that is new in this field. It also comes within the mutual scientific and cultural cooperation between the University of Bahrain and Loughborough University; as the University of Bahrain won financial support from Loughborough University and benefited from it to serve its scientific endeavours.